(This review was originally published in The Guardian on Nov. 07, 2013. It is no longer available on their website, however. I am thus posting the full review here.) 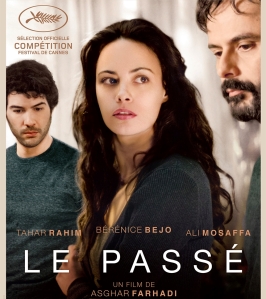 With watching Le Passé (The Past) comes great suffering. Asghar Farhadi, who previously directed the acclaimed A Separation, refuses to please us with the sex and violence of Hollywood, the sentimentalism of Bollywood, or the philosophical pretence of European art cinema. Le Passé is neither a morality tale, nor a political allegory, nor a philosophical exposé.

In the realm of conventional cinema, a film functions like Horace’s sugar-coated pill: it instructs as it entertains. A conventional film shows life with certain elements imposed on it, so that we can educe an ultimate ‘essence’, a ‘meaning’. Le Passé only confuses: it casts us into the extremely complicated lives of a group of people surrounding Marie (Bérénice Béjo), an employee of a Parisian pharmacy, and then abandons us there. It has no essence, no meaning, just like life, pure and simple.

Farhadi has designed Le Passé in which we are led to roam endlessly. It would be naïve to imagine the film as a didactic attempt to persuade us against judging others or to prove to us that morality is relative. That is just the first layer of the onion. The director indicates in every frame that it is not his place to preach anything. When you strip a film of that, it is just life with which the audience is confronted: harsh, lonely, melancholic, and absurd.

Le Passé is thus not the ‘drama-mystery’ that its IMDb page suggests. It is a film about the duplicity of conventional cinema, which has perpetuated the illusion that in life there are always lines dividing good and evil; past, present, and future; truth and reality. What Farhadi has captured with his camera is beyond what we are accustomed to referring to as ‘film’. He has embarked on a daring, radical detour into what we might call ‘meta-cinema’. He has blocked every way towards a conventional understanding, so that we are left only one exit: What if we go against the precepts of Plato, of Aristotle, of Horace and Sir Philip Sydney? What if we don’t use an untrue story to depict a universal truth, or a transcendental idea? What if, instead of a sugar-coated pill, we show neither pill nor sugar? What would happen then?

The answer Le Passé gives can be summed up in a single word: chaos – the realization that in a world bereft of God, spirituality, love, truth, or moral ideals, humans are doomed to perpetual wandering and wondering in an ocean of complete solitude with no beacon to lead them to the shore of certainty.

Echoing this perception, the film offers little in the way of plot. Every significant turning point in the story has taken place before it begins: Marie’s separation from her husband, Ahmad (Ali Mosaffa); the beginning of her romance with the younger Samir (Tahar Rahim); his own wife’s attempted suicide, which has left her comatose. With his co-screenwriter, Massoumeh Lahidji, Farhadi has taken great pains to make sure that, as the audience, we fail in any attempt to assign blame to one character or another. The necessary details have been planted scrupulously to thwart every attempt to grasp a glib ‘explanation’. What we have is a moment of pause, of reflection upon times past and several contradictory versions of what really transpired before the onscreen narrative commenced. Everybody is talking about the past, trying to understand and come to terms with it, and with this comes great angst, great suffering.

Writing about William Faulkner’s The Sound and the Fury, Jean-Paul Sartre likened one of the central characters, Quentin, to a passenger in a car who is sitting backwards. Instead of looking through the windshield, he gazes out the rear window. In Faulkner’s novel, argues Sartre,

everything has already happened. It is this that enables us to understand that strange remark by one of the heroes, “Fui. Non Sum.” In this sense, too, Faulkner is able to make man a sum total without a future: “The sum of his climactic experiences,” “The sum of his misfortunes,” “The sum of what have you.” At every moment, formless shadows, flickerings, faint tremblings and patches of light rise up on either side of him, and only afterwards, when he has a little perspective, do they becomes trees and men and cars.The past takes on a sort of super-reality; its contours are hard and clear, unchangeable. The present, nameless and fleeting, is helpless before it. It is full of gaps, and through these gaps, things of the past, fixed, motionless and silent as judges or glances, come to invade it.

How readily this passage applies to the experience of watching Le Passé. Sartre shows us the simple truth we have not been able to see for being too close to it: that the invention of language has convinced us that time can be divided into the Past, the Present, and the Future. This is a falsehood. The future does not exist, because it has not happened yet. In fact, it never happens as we would like it to. The present is ephemeral, a volatile concept. It’s impossible to put our finger on it. As soon as one begins to utter the sentence ‘I am’, the ‘am’ congeals into ‘was’. The present is just a brief moment of expectation for what is yet to come, and wistfulness for what is already gone. Thus, ‘Fui. Non Sum’ – ‘I was. I am not’.

As the end titles appear, we are still in denial. We gaze as hard as we can at the hands but—nothing. To our great dismay, the film stops. Farhadi forces us to swallow the angst, to let go, to ‘accept’ that life is life. It is devoid of miracles and has no background music. And the present is nothing but waiting for a future with unblinking eyes and regretting our mistakes that constantly encroach upon us from the past.